Since the NiSCA Plastic Card printers' introduction into the marketplace in 1994, NiSCA printers have been producing high quality full color plastic cards for Corporations, Education, and Government organizations. With thousands of hard working printers and hundreds of loyal dealers, VAR's, and system integrators around the world, NiSCA continues to be the leader in the identification card printing marketplace. NiSCA Corporation offers a broad product line from plastic card printers to document scanning systems to paper handling systems for the photocopier industry. The company's ability to manufacture many of its required components is critical to our success in controlling quality and reliability in our product offering. NiSCA technological leadership is obvious market wide:

Products range from the PR-C101 entry-level printer to the PR-C201 retransfer printer with over-the-edge printing. Our line of printers allows you to choose the best fit for your organization based on the durability, speed, and size that you need.⁠ 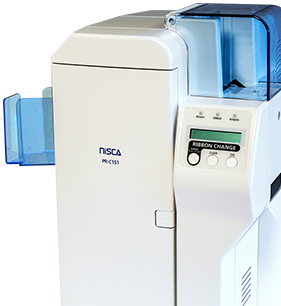 Continuing with R&D to reliably meet market demands, NiSCA constantly strives for the clear goal of meeting the market demands in its ventures into new technologies. No matter how satisfying a project may be to our engineers, it is the market that ultimately passes judgment on its value. It is precisely for this reason that we are ready to boldly challenge the perceived limits of current engineering when it may yield what our customers need. This stance of ours will not change. NiSCA is also working to further raise the level of professionalism of each of its engineers, with the goal of "one achievement per person." NiSCA Corporation was established in 1960 and today has over 830 employees in four locations. Our motto of "Creation of Value for the Future" is evident in its investments for future success:

A reinforced quality assurance program through ISO9001 certification. In January 1995, NiSCA received ISO 9001 certification, an international standard for quality assurance. Our QA program has received recognition on an international level. In addition to our customers in Japan, we are striving to offer products which will satisfy our overseas customers as well, through reliable quality extending from all stages from design through after-sale service.

Specifically, we have begun making efforts to use power and water more efficiently, appropriately reducing such waste as building materials and scrap paper, and other similar activities. While each of these is in itself is insignificant, we are confident that they will all add up to have a substantial effect. All of us at NiSCA are committed to working together as a whole, in the same spirit of accepting challenges that has served us well in R&D, to grappling with this problem.

Founded in 1910, Kanematsu USA Inc., a subsidiary of the Kanematsu Corporation, has been an American company as long as or longer than most well-known American corporations. Today, Kanematsu's network of companies is now comprised of offices in over 50 cities with worldwide sales over $6 billion.

Kanematsu Corporation is one of the oldest companies in Japan. We are a true business creator, committed to the constant evolution of the functions of a global company. With a founder's pioneering spirit and entrepreneurial ingenuity, Kanematsu Corporation, through new business creation and development, establishes solid relationships and pursues mutual growth with customers. Founded in 1889, Kanematsu's major business areas include IT related products, electronics, chemicals, pharmaceuticals, textiles, specialty steels, grains, foodstuffs and aerospace.

Swiftpro has been providing safe, secure, and reliable ID badge printer solutions to global organizations since 1989. Following the launch of the first thermal transfer printer over two decades ago, we have continued to pioneer disruptive technologies to establish ourselves as market leaders in the retransfer printing market.

Sinfonia Photo is a diverse product line of state-of-the-art products and accessories in the photographic digital imaging industry. Sinfonia products are offered under Sinfonia Photo, a business unit of Kanematsu USA Inc. and is backed by the strength and stability of a 120 year global company, Kanematsu Corporation of Japan.